Establishing a relationship between tidal current conditions and tidal turbine performance and loads is a critically important consideration for turbine reliability. Nonetheless, obtaining in-situ information is often challenging, and as a result both environmental and load data may be more sparse than desired. This study presents a method to make use of limited data sets by establishing a relationship between measurements of hydrodynamic variability and turbine power or blade strain variability, even when these measurements are not taken simultaneously. The method is tested on data from the deployment of a full-scale pilot tidal turbine: in situ velocity measurements and turbulence characteristics taken at times when the turbine was not installed were associated with power and strain measurements during the turbine’s deployment via a Delft3D proxy. The data show that the variability of active power correlates well with larger turbulence kinetic energy (TKE) when comparing similar populations via the proxy. Examination of blade strain variance against TKE shows a weaker correlation, with fat-tailed distributions and extremely high strain values prominent across all flow speeds. Acceleration or deceleration of the flow influenced the power variability of the turbine, with larger standard deviations recorded across accelerating flows. No significant difference was found when comparing blade strain variance in accelerating and decelerating flows. We conclude that the proxy method studied can establish a population-level relationship between non-simultaneous environmental and load data, but that the accuracy and precision of this relationship depends on the amount of data available: this method is therefore only suitable where there is a sufficiently rich dataset. 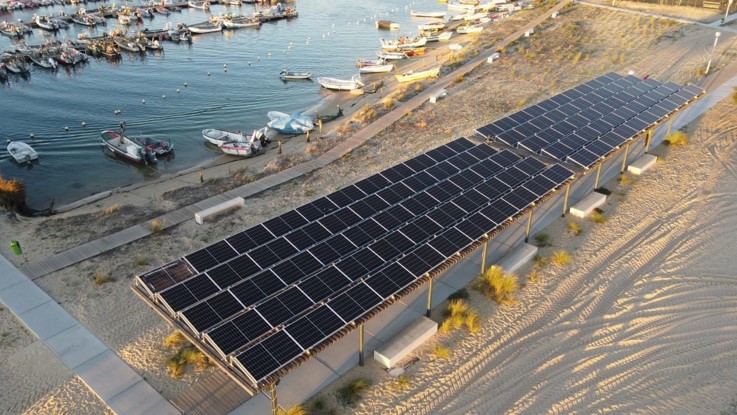